“They will poke their own eye out, maybe both of them”

“I can just see the couch becoming a prime target”

“I better get the bandaids ready…”

In reality this *generally* isn’t the case!

Kids are so fascinated with what they can create with the scissors, they don’t have time for any of that * other stuff * we’ve conjured up in our heads.

So I say, if they show interest, it’s time to brave up and get started.

Here’s a bit of a pep talk to get you started.

You are asking yourself “Why even bother with teaching you child to use scissors? They’ll probably just pick it up at kinder or school right??? “

Well yes, in a sense they will, however, using scissors is so much more than simply the act of cutting something out.

Kids have to learn to engage certain hand muscles that they have never used before. You try doing a chin up with no practice and see how successful you are!

The action involved in using a pair of scissor is actually pretty complicated and includes the function of ‘hand separation’ = Using the thumb, index, and middle fingers separately from the ring and little fingers.

This one seems like the opposite of what we, as parents, should do.

Get your little one new pair of * kids scissors* that way the blades will be sharp enough they will cut well (therefore not discouraging them with failed cutting attempts).

Being kids scissor the tips will be lovely and round and smooth and not ‘stabby and jabby’.

This is not to fool you into spending your hard earned on new scissors, the reason being is instead of actually cutting the paper, dull scissors only get as far as folding the paper between the blades.

If your child is left-handed, do them a favour and ONLY give them left-handed scissors to use.

YES they are different! The top blades on left-handed scissors are on the left side. This is so that kids can see the cutting line they are following.

Scissor Safety… I know you would always go through this and some of the things are totally ‘captain obvious’ style, however, if you are anything like me, sometimes the simplest of things can be easily overlooked.

Always supervise them. I recommend with a hot coffee and sweet treat at hand.

Still not too sure about letting your child loose with a pair of scissors???

Here are some warm up activities that strengthen the same muscles needed for scissor action without a pair of scissors in sight.

Go to your second draw and get out the kitchen tongs.

Get your child to use them to stack things, move things around, re-order things.

As a suggestion, cotton wool balls are awesome for this. Pop them in an empty egg carton and get your little one to pick them up and move them to another container. They can pretend to be a crane or have a robot arm.

Do you need some confetti? Play along because hole-punching is another great way to strengthen those little muscles.

That’s the way because who doesn’t want little circles of colour throughout their house… said not one ever!!!

Seriously though, embrace it! Why not get some paper that matches your décor and then you don’t have to feel pressured to clean it up… Its planned styling J

That open and close motion of pegs is perfect! Pretend to be crocodiles, or make sculptures of card and pegs. Better yet, get them out there helping you with the washing!

All right, now we are finally ready to brave actual scissors!

First up, help to position the scissors in your childs hand. Physically move their fingers to where they should be.

You do it too, give your child something to copy. Sit next to your child, not across from them (hands up who is unco like me and has ever tried to follow along in a, aerobics class).

Pretend the scissors are a crocodile and make the verbal instruction into a story.

Before they are cutting out masterpieces like no ones business, try building up their skills with some of the following:

When they are flying solo, a helpful things to do is to hold their piece of paper above their eye level so they are cutting upwards, it is more natural for them.

Wait a minute, I promised you a cup of coffee and sweet treat… do what I do and tape it to the wall, kitchen cupboard, anything = problem solved!

Now they have graduated scissors 101! This is when all that confetti is useful!!!

Want to know the secrets to successful craft time? 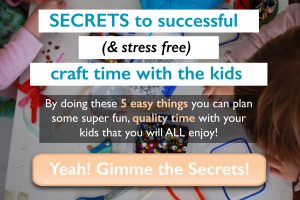 For a bit of ‘behind the scenes’ action & some Mum conversations